06/26/08 Editor Don Harrison Says Thay He Can't Update Greenwich Citizen Website For A Week, Because He Is Too Busy Writing This Weeks Editorial 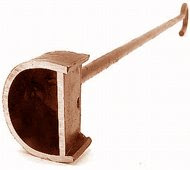 In fact, the always late newspaper editor was so proud of his latest editorial that he gave the residents who complained about his rarely updated website a sneak peek at this Friday's Greenwich Citizen Editorial.

When are the Republican's in this town going to start requiring that registered Democrats be branded with a letter 'D' in order to tell them apart from "real Greenwich residents."

The number of Democrats in town are increasing. Everyday, they are even walking among us on Greenwich Avenue, and we don't even know it.

Democrats send children to our schools. They ride the beach ferry. They pee in Town Hall toilets.

They even voted overwhelmingly for Barack Obama!!!!

The Greenwich Citizen thinks that is high time that every voting district in Greenwich would be assigned a District Branding Officer, who would be equipped with a red hot branding iron containing a 2 1/2" high big letter 'D' on a 12" long safety handle.

As Greenwich voters declared their party affiliation at the polls this November, Democrats would be branded before being allowed to vote.

This branding proposal is really not as radical as it sounds, because a lot of these Greenwich Democrats already have tattoos already.

To be fair Democrats should be able to pick where they want the branded.

Greenwich Democrats should not have a District Branding Officer slap a big 'D' on their forehead if they don't want it there.

Further each voting district should have on ambulance from GEMS on hand in case things don't go well with the branding.

Of coarse, they should be Registered Republican - GEMS Emergency Medical Technicians.

The Greenwich Democratic Chairman will probably file a federal lawsuit alleging that the practice "may violate the civil rights of some Democrats.

The town attorney has plenty of legal friends who are more that willing to get big bucks for defending the towns right to give town Democrats a red hot iron to the ass.

If the town successfully implements the Greenwich Citizen's branding proposal, then the Citizen will advocate a second proposal to castrate all Green Party men next year.

There is no reason to use public funds for the branding and castrations.,

It will be easy to raise back country Republican private money for the efforts.

Greenwich must remain Republican at all Costs !!!!