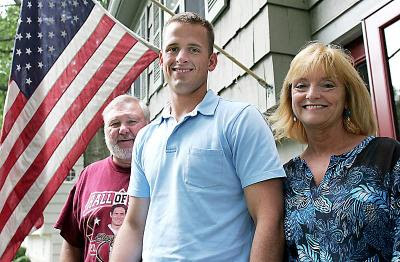 Greenwich resident Tim Rose, a 2002 graduate of Greenwigh High School, stands with his parents, Rod and Kate Saggese, Friday while on leave from a 15-month tour of duty in Afghnistan as a lieutenant in the 173rd Airborne Division of the U.S. Army.
(David Ames/Greenwich Time photo)
Ranger spends time with family, friends after tour of duty in Afghanistan

For Tim Rose, the best thing about being back in Greenwich after a 15-month stint in Afghanistan is not having to make tough choices.

A lieutenant in the U.S. Army's 173rd Airborne Division, Rose has spent the past week "going with the flow," he said, as he catches up with old friends and family members during his 30-day leave from active duty in Afghanistan.

"As an officer, people are always looking to me to lead, to be the decision-maker," said Rose, 23, who has spent the last year battling Taliban forces in an elite unit of Army Rangers.

"Here, the only choices I have to make are where I want to get dinner, or whether I can meet up with friends at a certain time," he said....

....While the Army provides its own aid packages for soldiers to pass out, Rose's mother, Kate Saggese, also contributed to the cause - mailing care packages stuffed with goods from the charity drives she'd helped organize at GHS, where she works as a special educator.

Delivering these supplies to destitute villagers was one of the most rewarding experiences of his deployment in Afghanistan, Rose said. "We'd come in, and everybody would be very skeptical of us, at first," he said. "But by the end, you'd see how things had improved. We'd leave, and everybody would have a smile on their face."

Rose leaves Sunday to travel with friends to the Dominican Republic for a week - the final hurrah, he said, of his month-long "R'n'R" break before returning to his base in Italy.

There, he hopes to undergo more training with the hope of joining a special operations unit. He does not expect to return to Afghanistan.

Don't Worry No One Will Be Fired For Yet Another Failure !!!!

The Failed School Administrators All Got Raises!!!!

And The Same Morons Are In Charge Of The Glenville School Project!!!!!
No C.O. for Ham Ave.: Mid-October new target for school opening

The Hamilton Avenue School project missed another crucial deadline yesterday when the building failed to win approval for occupancy because of lingering facility-related issues.

...Under the backup plan, Hamilton Avenue students will spend part or all of the year in modulars, while Glenville students attend class at four sites - Parkway, Julian Curtiss, Cos Cob and Western Middle schools - this fall.

Once the delay-mired Hamilton Avenue project is completed and approved, its students can move into their new building, allowing Glenville students to use the modulars...

..."I'm trying to be positive, because if you're positive, your children will be positive," said Glenville mother Alicia Budkins, whose son will start classes at Western Middle School this month.

08/15/08 Greenwich Time Editors And Reporters Were Clueless, Because They Had Their Heads Up Their Rear Ends And Could Not Hear Hamilton Avenue Moms

But School Board Members And PTA Insiders Say That Parents Must Not Criticize The Failed Administrators Who Are Wasting Tax Dollars.

No, They only want to only hear positive affirmations about school officials.

While most everyone believes in the power positive affirmations. Everyone still realizes that you can't sit on the couch and say "I wan't to lose twenty five pounds by new years", as you eat a box of twinkies.

It's Time To Get Real It's Time To Fire Failed Administrators That Are Wasting The Hard Earned Tax Dollars Of The Single Family Homeowners Of Greenwich.

Those poor little children at Glenville School are going to get screwed by the same idiots that harmed the children of Hamilton Avenue School.

Back in March School Superintendent Betty Sternberg said her administrators would be held accountable.

No one has been fired or demoted!!!!

No Betty gave them all pay raises!!!!!

Then Let's Get A Superintendent Who Will !!!!

Old Greenwich resident Josie Monroe, 86, has been going to the Senior Center on Greenwich Avenue for more than 20 years and now serves on the board.She recently sat down with Greenwich Time to talk about issues seniors are facing and what she loves about the facility. ....

...We enjoy our aerobics, enjoy our trips and holiday programs here and have really good lunches. And people here are congenial.

Following a contentious meeting at Quarry Knoll Wednesday, residents still have questions about the town's plans for the 50-unit affordable housing complex.

The proposal by the Greenwich Housing Authority is to redevelop the complex and add 76 units, moving the residents into an expanded and renovated McKinney Terrace in Byram until the new facility is ready, according to Executive Director Anthony Johnson.

But with Byram residents resisting the expansion plans for McKinney Terrace, Quarry Knoll residents are left questioning where they will end up...

It is not unusual for the state Department of Administrative Services to receive one or two calls a week from residents complaining about a public employee speeding in a state vehicle or talking on a cell phone.

But when Gov. M. Jodi Rell earlier this summer announced an out-of-state travel ban to reduce the budget deficit, there was a boost in calls from eagle-eyed taxpayers complaining about other ways they thought the government wastes gas.

"We got a rash of calls," Deputy DAS Commissioner Martin Anderson said. "(People) saw a vehicle they thought was idling to long or going over the speed limit."

That heightened interest in the driving habits of state employees has resulted in the launch of a new program that in the coming months will see "Am I Driving Safely?" bumper stickers attached to the 4,200 state vehicles managed by Department of Administrative Services....

A Greenwich woman was indicted Thursday for mail fraud in federal court in White Plains, N.Y., in connection with an investment scheme that prosecutors said bilked investors of $1.65 million, the U.S. Attorney's Office for the Southern District of New York announced....

...The Murcias lied to potential investors, telling them that the business had a $2.5 million contract from Sodexho International for water treatment stations in Sudan, but Sodexho did no business in Sudan at the time and had no record of dealings with Regenat, according to the indictment.

The prosecution claims the Murcias transferred $275,000 of the investment capital into their personal account and used another $140,000 for rent on their home, as well as more than $8,000 for a 60th birthday party for her husband, Philippe Murcia.

Milana Murcia is scheduled to be arraigned in White Plains on Wednesday.

The Board of Selectmen at their Thursday meeting unanimously approved a controversial plan to turn the intersection of Shore Road and Sound Beach Avenue in Old Greenwich into an all-way stop.

The suspicious white powder found at One Greenwich Plaza Wednesday is not a biological substance or hazardous, according to fire officials.

The building, located just south of the Greenwich central train station, was evacuated shortly before 11 a.m. Wednesday after police said they received a report that a suspicious package had been found in the building.

"It was determined that it was not anything like anthrax," said assistant fire chief Robert Kick

It was wrong to fire columnist

It is my understanding that the termination of Sarah Littman was considered a "personnel issue" and one that the Greenwich Time "were not at liberty to discuss" as stated by Jim Zebora, the managing editor. Such an explanation is both evasive and inadequate and indeed is tantamount to an avoidance of the real reason.

According to Ms. Littman, the explanation offered to her was that she had compromised the integrity of the paper in that she had held a meet-and-greet (non-fundraiser) for Jim Himes and that one of her columns was critical of his opponent in the primary.

Indeed if integrity was compromised it was through the short-sighted method in which Ms. Littman was denied the exercise of her professional prerogative. Since when is a columnist so restricted? Reporters are charged with dealing with facts in an accurate and objective manner, whereas a columnist provides commentary. Can you imagine how sterile and bland the likes of Pegler, Reston, Wills, Paige, Dumas and Yudain would be under such restraints.

Your reading public has been poorly served with such an unwarranted action. Reinstatement of Ms. Littman as a columnist would be in order.