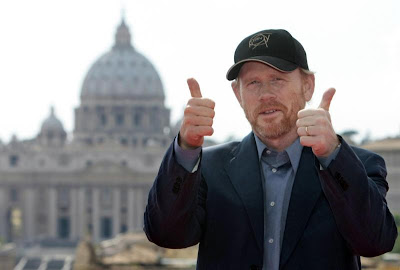 Every One Is Reporting That Ron Howard Isn't Afraid Of The Big Bad Catholic Church, But No One Is Reporting That The Assassin Henchman Of The Mad Clergyman In The Movie Is Not A Rabid Muslim As He Is In The Novel, But A Very Lapsed Catholic.
He Is Not Killing For Allah, But For Money.
This is nothing new, of course.
Take, for example, 2002's "Sum of All Fears," an adaptation of the Tom Clancy novel by the same name, where the novel's chief villains were changed from Palestinians bent on subverting American support for Israel to neo-Nazis hoping to trigger a nuclear war that would destroy the U.S. and Russia out of a desire to avenge the demise of Hitler's Third Reich.
READ MORE ABOUT THE HYPED UP FAKE CATHOLIC CHURCH CONTROVERSY DESIGNED TO MAKE YOU THINK RON HOWARD IS AN EDGY DIRECTOR.......
Angels and demons and 'poppycock,' says Church
USA Today
It could only be time for Angels & Demons, the Dan Brown book turned Ron Howard-Tom Hanks thriller. Anticipating that the movie might be controversial, ...
Angels, demons in O'Malley's realm
Boston Globe
But, in a strange confluence of popular culture and Boston Catholicism, that very scene in this weekend's grisly blockbuster movie, "Angels & Demons," takes ...
Angels & Demons is more story than history
Houston Chronicle
Film tackles debate between church, science
Vancouver Sun
'Angels & Demons' lacks chemistry, zeal
Baltimore Sun
'Angels & Demons' Cheat Sheet: We Decode 'Da Vinci Code' Sequel
MTV.com
The Star-Ledger - NJ.com
Detroit Free Press
all 1,165 news articles »
Of Coarse The Greenwich Time Is No Different......
Howard rebuffs critics of 'Angels & Demons'
By Neil Vigdor Movie Critic
Posted: 05/15/2009 07:37:23 AM EDT
Ron Howard is fending off a different breed of movie critic with today's nationwide release of his latest blockbuster, "Angels & Demons."
The Oscar-winning director and Greenwich resident answered his critics in the Catholic Church Thursday during an interview with Greenwich Time about his new thriller, which a number of clergy leaders have given two thumbs down because of its depiction of acts of violence against priests and sacred religious shrines.
"They're sort of screaming at shadows," Howard said.
Howard, 55, the child star-turned-director of 20 films, touched on a variety of topics during the interview, from the aggressive marketing of "Angels & Demons" and the lengths its crew went to get footage of the Sistine Chapel to the recession's impact on Hollywood and the reception his new film is getting from church leaders.
Like his other films, "Angels & Demons" was cut at Howard's post-production studio in Greenwich. ..... BLAH ..... BLAH ..... BLAH ...... BLAH .....
Howard said he is used to the fuss after "The Da Vinci Code," which was criticized for its sinister portrayal of the Catholic brotherhood Opus Dei.
"What I heard during 'Da Vinci Code' a lot was priests and ministers saying, 'I welcome that this stimulates curiosity about our church and our faith,' " Howard said. "I think that's a healthy thing and something good fiction ought to do."
Don't count on Catholic leaders from the Diocese of Bridgeport, which includes Greenwich, to be lining up at theaters today, however.
In the May 9 issue of the Fairfield County Catholic, the monthly newspaper put out by the diocese, the title of the editorial is "Opie Dopey," a dig at the character Opie Taylor played by Howard as a child on "The Andy Griffith Show."
"Andy Griffith and the good people of Mayberry would not approve of Opie's behavior these days," the editorial states. "Ron Howard, the childhood actor turned award-winning director is at it again, bringing another nasty Dan Brown novel to the big screen in 'Angels & Demons.'"
The newspaper's publisher is Bridgeport Bishop William Lori.
Howard said he had read the editorial on the Internet.
"I wonder if he's seen the film. I don't think he has," Howard said of Lori. .... BLAH .... BLAH ..... BLAH ...... BLAH ......
"It's changing the economics of the business, for the worse at the moment," Howard said.
The marketing budget for "Angels & Demons" is similar to that of "The Da Vinci Code," according to Howard.
"'Da Vinci Code' was sold as a thriller when, in fact, it was as much a story of these sort of provocative ideas. This is also being sold as a thriller but this has first and foremost fulfilled that promise," Howard said. "It's kind of a thinking person's entertainment."
-- Staff writer Neil Vigdor can be reached at neil.vigdor@scni.com or at 625-4436.
Read More »
It Looks Like Greenwich Time Reporter Niel Vidgor Did Not Even Read The Book, Because He Failed To Ask A About The Missing Radical Muslim Killer That Was Cut From The Movie.
Maybe Ron Howard's Next Movie Should Be Called "The Counterfeit Beach Pass Code". It Could Be About The Angels And Demons Involved In Ripping Off Greenwich Taxpayers.
The Focus Could Be On Reporter Niel Vidgor Who Kept The Binder Full Of Beach Passes In His Bottom Desk Drawer Instead Of Publishing Them In The Greenwich Time. Thus Allowing Unpunished Felons To Roam Freely In Greenwich.
==============================================
Please send your comments, news tips and press releases to GreenwichRoundup@gmail.com
Posted by Greenwich Roundup at 5/15/2009 09:38:00 AM