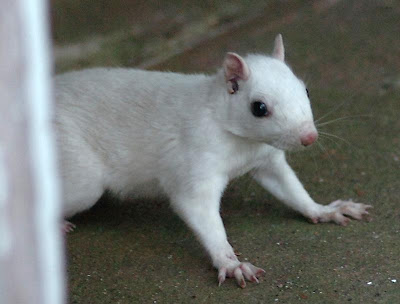 The white squirrel seen in Old Greenwich most likely suffers from "leucism," a rare genetic condition in which the body cannot produce pigment on all or part of its skin and fur.
(Keelin Daly/Greenwich Time photo)
Old Greenwich resident Joe Mozian calls it a harbinger of heavy snowfalls this winter. His hockey-playing sons, Michael, 10, and Alex, 8, call it a good-luck charm that helps them score goals.

His hockey-playing sons, Michael, 10, and Alex, 8, call it a good-luck charm that helps them score goals.

For two months, a rare white squirrel has taken up residence amid the hardwood trees and low-lying foliage of Mozian's yard on Marshall Street.

Affectionately named the "Polar Squirrel" by Mozian's two sons, the bushy-tailed rodent sports an all-white coat from tip to tail and can be spotted about twice a day, zipping back and forth across the lawn, darting over fences and racing across the tree tops, witnesses said.