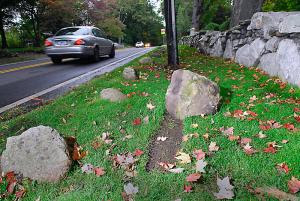 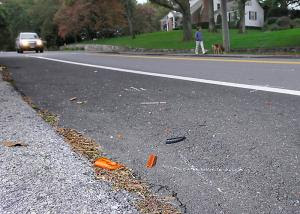 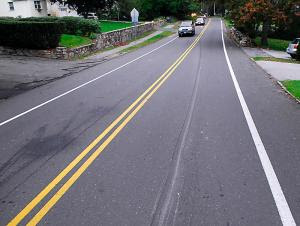 CABLEVISION NEWS 12 HAS BEEN EXCLUSIVELY REPORTING
ALL NIGHT THAT A LATE NIGHT BIKE RIDE ENDED
VERY BADLY
The Greenwich Police Department Has Launched An Investigation and are looking for and interviewing any potential witnesses.

A Man has been killed. The car hit the victim then crashed into a telephone pole down the street.
According to a death scene witness bike parts littered the road, as well as, one of the biker's shoes.

There Is Nothing From The Greenwich Citizen
Or Greenwich Post.

There Is Only A Brief Posting
At The Greenwich Time.
Fatal pedestrian accident remains under investigation

GREENWICH - Sheephill Road remains closed to traffic as police continue their investigation of a fatal accident involving a pedestrian near the intersection of East Putnam Avenue.
The accident occurred late Sunday night.

Greenwich police are expected to release more details of the accident later Monday morning.
Who is right Cablevision News !2 Or The Greenwich Time?
Was The Victim A Bycyclist Or Pedestrian?

earlier than it was

Not only did Martin Cassidy get the time wrong

he also got the story wrong.

The Hit and run victim was a bicycle rider not a pedestrian.

Sheephill Road was closed from midnight to 8 a.m. while the investigation was conducted, Berry said. Berry did not release additional information about the operator of the car or the circumstances of the accident.

"It's an ongoing criminal investigation,"Berry said.

time logs to make it appear that Hearst Newspaper story was

filed earlier than it was.

gets his time logs wrong,

but he corrects his pedestrian screw up.

GREENWICH -A 20-year-old unidentified Greenwich man was killed late Sunday night when he was struck by a car on Sheephill Road near Sound Beach Avenue Extension while riding a bicycle, Greenwich Police Lt. Daniel Allen said.

Police responded to a 11:46 p.m. 911 call about the accident and found the man lying in the street, according to police. The male driver of the car, whose identity police withheld, was also on the scene and told police he had struck the bicyclist, police said.
A criminal investigation of the accident is ongoing, Allen said yesterday.

The Office of the Chief State's Medical Examiner will perform an autopsy to determine the victim's cause of death, according to police.

The Greenwich Post Reports On The Fatal Death On Sheeephill Road

Police are investigating the death of a local man after a car accident on Sheephill Road Sunday night.

The victim’s identity has not been released pending the notification of family, but Public Information Officer Lt. Daniel Allen told the Post this morning that he was a 20-year-old town resident who had been traveling on a bicycle when he was hit by a car. Lt. Allen would not comment on any more specifics because of the ongoing investigation.

According to police reports, a 911 call was received at 11:46 p.m. Sunday night reporting an accident involving a car and a pedestrian on Sheephill Road north Sound Beach Avenue Extension. Police, paramedics and the fire department all responded to the scene and reports state police found the man lying on the shoulder of Sheephill Road “obviously deceased.”

Police said another man, who identified himself as the driver, was found standing nearby. The driver’s name has not been released yet. The state’s Office of the Chief Medical Examiner took possession of the body and an autopsy will be performed to determine the exact cause of death.

A criminal investigation is underway by the police department’s Traffic Division. The division’s Collision Reconstruction Unit responded to the scene and Sheephill Road was closed between Sound Beach Avenue Extension and Old Orchard Road from midnight until 8 a.m. this morning to allow investigators full access to the scene.

Check Greenwich-post.com for more information as it becomes available.

THAT THERE HAS BEEN A HIT AND RUN DEATH IN TOWN