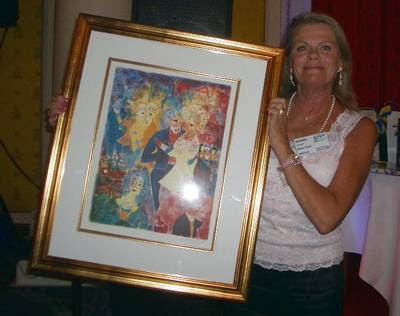 Photo: Kerstin Lindholm With another Piece Of Artwork

The Am Law Daily

A Swedish heiress has sued Proskauer Rose for nearly $9 million, accusing the firm of manipulating its billing practices to overcharge her by millions. In a separate malpractice claim, she alleges that the firm mishandled her suit against the jet-setting art buyer who purchased an Andy Warhol silkscreen that had been stolen from her, court records show.

The heiress of a Swedish building fortune, Kerstin Lindholm of Greenwich, Conn., retained Proskauer in March 2002 to pursue claims against Peter Brant, the media mogul and Warhol enthusiast who purchased "Red Elvis" for $2.9 million in 2000 while it was on loan to the Solomon R. Guggenheim Museum, court records show. Brant bought the painting--worth at least $12 million in 2003--from a crooked Swedish art dealer who sold it out from under Lindholm, according to court records and this New York Times story. The dealer eventually served prison time for the theft, but Lindholm never got the painting back.


A Connecticut judge ruled in favor of Brant in 2005.


Now Lindholm and Proskauer are involved in an ugly dispute over fees that peaked earlier this month, when Lindholm sued the firm in state court in Connecticut. And her legal team at Bello, Lapine & Cassone in Stamford, Conn. has included something of a smoking gun as an exhibit in their complaint--an internal Proskauer memo written on letterhead bearing the name of a Proskauer associate who appears to have reviewed the firm's Lindholm file at some point. (The note is undated.) In the handwritten note, the associate writes that descriptions of the firm's work "may suggest double billing for same work," that "rates are quite high," and that there was an "overall excessive handling of every item in the case."

....Lindholm claims she has paid more than $1 million to Proskauer in legal bills so far, and the breach of fiduciary duty count in her suit seeks $850,000--the difference between Proskauer's original estimate and the amount she has paid.

The larger malpractice count seeks $8 million and accuses the firm of failing to pursue a claim against the Guggenheim. Lindholm believes she has a course of action because the museum should have notified her immediately when Brant asserted a claim of ownership to "Red Elvis" over the phone in 2000, according to the complaint. Had the museum done so, the suit claims, Lindholm could have stopped delivery of the painting to an address in Denmark, where the dealer arranged for its sale to Brant.

Lindholm's agent suggested Proskauer sue the museum, but the firm concluded she had no claim against the Guggenheim. Lindholm also pushed for a jury trial, but the firm waived her right to a jury trial and argued the Brant case before a judge instead. The suit claims Proskauer did so because Lindholm wasn't paying her bills and the firm wanted to finish the case quickly.