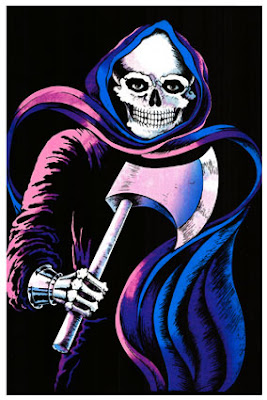 FIRST GREENWICH ROUNDUP REPORTED.......
1/31/09 EXCLUSIVE: You Wont Read This In The Greenwich Time - End Maybe Near For Madoff "Victim" Fairfield Greenwich (Updated)
Local Greenwich Sources Tell Greenwich Roundup ....
Hedge fund firm Fairfield Greenwich, which lost more than half of its assets to scummier Bernard Madoff, is in the process of or preparing to winding down operations and could shutter its doors by summer.
The fund, which is headed by Greenwich Resident Walter Noel has been rumored to have cut its staff by 30 - 50% Greenwich Roundup has learned and people familiar with the situation have said that some remaining Fairfield Greenwich employees have been told that they may be let go by late July. Generous severance packages are being offered to keep key staff members on board and quite.
Walter "Feeder Fund" Noel lost a who headed the Fairield Sentry Fund "invested" a whopping $7.5 Billion with his chum Bernard Madoff. Fairfield Greenwich Investors have been lead to believe that there was an additional $6,5 Billion left to pay investors back. This might not be entirely accurate......
.....Walter Noel who long ago suspended investor redemption requests for non-family members and is now apparently working toward selling off the firms surviving assets held in offshore tax havens.
Also wounded by the Madoff scandal is hedge fund firm Tremont Group run by Mass Mutual . The Rye New York fund also lost more than half of its assets ($3.1 Billion) to Madoff. Press reports last week said that Tremont was in the process of shutting down operations.
THEN THE NEW YORK POST EXCLUSIVELY CONFIRMED THE SELL OFF JUST TEN DAYS LATER......
2/09/09 : FAIRFIELD GREENWICH GROUP: The Fire Sale Begins Fairfield Founders Begin Selling Assets At Soon To Be Closed Hedge Fund
MADOFF SELL-OFF:
Times are getting tough for Walter Noel and Jeffrey Tucker
Fairfield Greenwich Brass Recently Dumped A Shared Interest In A Cessna 560XL Private Jet
Greenwich Fairfield heads Walter Noel and Jeffrey Tucker have been selling off their fortune in anticipation of legal action
Melanie Tucker has had to cut back on her bridge habit
HEDGE-FUND HONCHOS BURNED IN SCAM START FIRE SALE
New York Post
The founders of a New York hedge fund at the center of the Bernard Madoff scandal have begun selling assets as their firm faces massive losses and a slew of lawsuits, sources told The Post.....
The pair recently dumped a shared interest in a Cessna 560XL private jet, according to a person close to the firm.
The duo purchased a one-sixteenth share in the jet in late 2006, giving them between 25 and 50 hours of use a year. Experts estimate the sale saves them a portion of the plane's $200,000 annual maintenance fees, plus $2,000 for each hour of use.
Meanwhile, Tucker - the lesser-known founder of the Madoff-scarred firm - is looking to sell his posh horse farm in Schuylerville, NY, near Saratoga Springs .....
NOW GREENWICH BLOGGER CHRIS FOUNTAIN FURTHER CONFIRMS THAT FAIRFIELD GREENWICH IS SHUTTING DOWN .......
Say goodnight, Walter « For What It’s Worth
A reader alerts me that Walter Noel’s Fairfield Greenwich Group has taken down its website - or at least its wonderful due diligence page in which it promised to investigate anyone they entrusted money to. Sadly, when I wrote on December 14, 2008 about FGG’s complete failure to conduct due diligence on Bernie Madoff I linked to their site, rather than make a copy of the page and post that. So the link’s now defunct. Oh well, I’m sure it will show up in court pretty soon.
UPDATE: Here it is, thanks to Google’s cache system. Just to make it doesn’t get lost again, Walt, ‘m posting it on my site - fewer accidental erasures, don’t you know.
This is Google’s cache of https://www.fggus.com/guest/due_diligence.html. It is a snapshot of the page as it appeared on Feb 15, 2009 05:10:40 GMT.
The current page could have changed in the meantime. Learn more
================================================================
Please send your comments to greenwichRoundup@gmail.com or click on the comments link at the end of this post.
Posted by Greenwich Roundup at 2/21/2009 04:34:00 AM