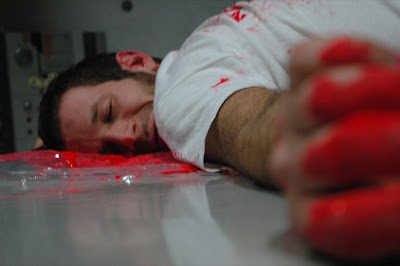 HERE IS ONE OF THE GREENWICH CONNECTIONS
While the total extent of Bernard Madoff's Ponzie madness will take a long time to properly flesh out, it is known that Madoff managed money for a very wide range of investors, including prominent New Yorkers, university endowments and huge charities.

But Madoff's scam - which incredibly, Madoff himself estimates to be at least $50 billion - could extend way beyond those big shots directly affected.

Listen to the howls at Greenwich country clubs as the ripples of Madoff's ruse spread into back country mansions of Greenwich.

There Are A Number Of Serious Ramifications

First, it will serve to cripple an already-skeptical individual and institutional investors.
These investment morons hold the Harvard Educated Fools that are Greenwich Hedge Fund managers in such high regard only to be disappointed time and again.
When will they ever learn?

Madoff's investment-advisory arm, which is at the center of the Big Fat Billion Dollar Ponzi scheme, managed only $17 billion in assets, insiders suspect the only way his scam could have reached $50 billion was through massive borrowing.

A number of "So-called" respectable institutions, from banks to firms that manage funds of hedge funds, will likely be damaged by yesterday's stunning revelations.
One Group known to have worked with Madoff in the past is alternative-asset manager Fairfield Greenwich Group

Sources tell The Post that Madoff managed money for Fairfield Greenwich through a $7 billion hedge fund called Fairfield Sentry, which Nomura and NPB offered to clients.

Take A Look At This Link

Any fool can see that most suspensions of redemptions by hedge funds was because they could not meet the redemptions without collapsing ala Madoff.

This suspensions of redemptions non-sence is keeping fund managers in business until the end of 1st quarter, while extending the losses for posh investors unable to withdraw their trust fund investments.

Hedge funds managed by Harvard Educated Fools and other Ivy League Schools generally follow a herd mentality and do what the other funds do, chances are many if not most are as much a big fat empty shell as Modoff's.

How many Trust fund babies, who are hedge fund investors are now broke but just don't know it yet?
I'll bet many that had these trust fund babies that had redemption requests denied or postponed suspect that something is not kosher and they might have to learn a new skill like waiting on tables at fancy Greenwich resturants.

The Greenwich Citizen, Greenwich Post and Greenwich Time should start watching for these hedge fund managers are going start trying to sneak their assets out of the country, in anticipation of fleeing prosecution.
If the complacent mainstream press of Greenwich are too inept to do the job, then Greenwich Roundup will have to send out an "All Points Bullitien" on local Hedge Fund Managers.

It Is Not Just In Greenwich
A sum bag attorney named, Marc Dreier, who fancied himself as a jet-setter was jailed without bail Thursday after a federal prosecutor - branding him a "Houdini" who might escape the country -- said the losses from his "hedge fund fraud" have surpassed $380 million.

Judge Douglas Eaton said Marc Dreier posed an "extraordinary risk of flight" in a case that "seems to have some extraordinary behavior."

"His life has completely unraveled," the prosecutor said, adding that the possibility of life in prison had to be crushing for "an extremely rich man who flew private jets and met rich and famous people."

lMore Information At This Link

Something tells me that there are more than a few Martin Frankle Wanna Bes running around Greenwich right now.

"Many of these people are going to go from being very wealthy to virtually destitute," said Brad Friedman of law firm Milberg LLP, represents dozens of people who invested over $700 million with Madoff.

"At one point, he was the favoured broker of Palm Beach," a club member told the Palm Beach Post newspaper. "Every big guy was his client.

Another Link For Greenwich Trust Fund Babies To Check Out

Madoff Victims’ ‘Tragedy’ Said to Have Escaped Scrutiny by SEC

(Bloomberg) -- Bernard Madoff’s investment advisory business, alleged to be a Ponzi scheme that cost investors $50 billion, was never inspected by US ...

Reuters - Geneva-based private bank Benedict Hentsch said on Friday its exposure to Madoff products was 56 million francs, or 5 percent of its asset under management. ...

Swiss bank says it has $48M invested with Madoff

Fred Wilpon and Bernard L. Madoff grew up in the 1940s less than a dozen miles from each other in middle-class neighborhoods of New ...

Or You Can Read: