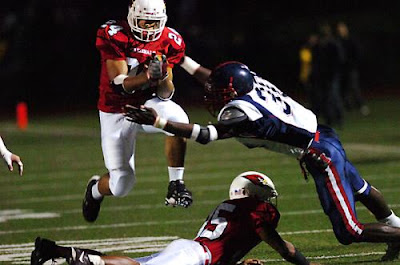 Big Red Buzzsaw: Greenwich routs McMahon
A severe storm hit Cardinal Stadium Friday night, only this onslaught had nothing to do with Mother Nature - instead it was raining touchdowns and tackles for loss courtesy of the emotionally-charged Greenwich High School football team
Sailors recount attack on USS Liberty
Two former sailors who were aboard the USS Liberty when it was attacked by Israeli jets and submarines in 1967 told their stories of the event Thursday night at Greenwich Library.

The Taser incident at Greenwich High School last spring may have caused an uproar in the school community, but not enough to convince families that the school system should do away with the School Resource Officer program, new survey results show.
Camillo, Krumeich square off for 151st

Bob Luckey/Staff photoThe two men competing for the only contested Greenwich seat in the state House of Representatives met publicly as opponents for the first time Thursday, at a forum sponsored by the Greenwich Bar Association.

Voters are right to demand debate

Through wars, natural disasters and economic calamity, this nation has always gone about its election business.

'Pocket park' for Byram would be a waste of money
To the editor:

The first selectman has acknowledged the need for belt-tightening. Now is a good time to reconsider the Church Street pocket park in Byram. It is intended to provide access to a waterside walkway that will run to town property further north along the Byram river.
The town is not prepared to fund the walkway or the second park at the north end because, among other reasons like cost, the town is using it to store equipment and has not developed an alternative.

The Church Street "park" would sit directly in front of (25 feet away) a three-bay working automotive service station, and it would take away 10 public parking spaces that are used every night by nearby residents.
A few years ago, the town tried to purchase nearby lot for $400,000 that would provide 20 much-needed parking spaces. It doesn't make sense now to spend $350,000 for one piece of a waterfront facility that would take away 10 parking spaces. It makes sense to wait at least until the town is prepared to go forward with the rest of the plan.

Only a small number of Byram residents even want this. Twenty people were present at the Byram Neighborhood Association's July meeting when this plan was approved. But 150 residents signed a petition saying they wanted to see school sidewalks built instead. Then-First Selectman Jim Lash, when presented with this, said in effect that building the pocket park wouldn't take away from building the sidewalks - both can be done. Well, two years later, and the sidewalks aren't built, and we can hope Greenwich has stopped saying yes to everything.
We should delay this pocket park and focus on public safety projects first. Parking alternatives should be in place before these 10 are taken for the pocket park.