1/7/09 Kennedy cousin and convicted Greenwich murder Skake is asking a judge to get out on bail, becausel he claims key evidence withheld (Updated) 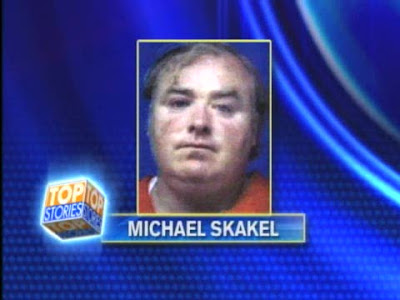 You Wont Read This At The Greenwich Time
Mickael Skakel's Lawyers Say The Greenwich Police Department Failed To Provide Them With Evidence They Had Pointing To Another Suspect.
Skakel Asks A Federal Judge To Let Him Out On Bail.

The Hartford Courant Scoops All 40
Hearst Newspapers In Fairfield County

Convicted celebrity murderer Michael C. Skakel says he has uncovered secret evidence suggesting his innocence and is using it to support an unusual effort in federal court to obtain release from prison while his appeals proceed through a variety of courts .

In a federal motion filed late Thursday, Skakel's lawyers say state prosecutors improperly concealed two pieces of exculpatory evidence during his trial in the murder of Martha Moxley — an interview that discredits the star prosecution witness and police reports suggesting that a 15-year-old Greenwich boy, later convicted of another murder, had information concerning Moxley's death.

Every turn in the case has been followed assiduously by a small army of reporters focused on Skakel's relation to the Kennedy family — he is a cousin — and sordid disclosures about life in the private Greenwich neighborhood of Belle Haven, where the two teens grew up.

Since his conviction, Skakel has served six years in state prison while a new legal team, Hartford lawyers Hope Seeley and Hubert Santos, have filed appeals in the state Superior Court, state Supreme Court and U.S. District Court. The appellate issues run from arcane legal questions to assertions of ineffective legal assistance and allegations of bias on the part of a prosecution investigator who was paid for information by an author......

......The federal motion filed Thursday argues that the cumulative weight of the two new evidentiary disclosures, combined with previously raised appellate issues, is so extraordinary that it justifies Skakel's release on bail while the appeals are sorted out.

Fairfield County State's Attorney Jonathan Benedict, who led the team that convicted Skakel, declined to discuss any aspect of the case Thursday, including what the Skakel lawyers assert are the two pieces of previously withheld evidence.

One of those pieces of evidence appears to further erode the credibility of Gregory Coleman, a now deceased drug addict and ex-convict, who said Skakel once bragged that he would get away with Moxley's murder because he is a Kennedy. The conversation was said to have taken place at the Elan School in Maine, an institution for teens with addiction problems.

Coleman died of a drug overdose before the trial, but prosecutors were allowed to read to jurors from transcripts of his testimony to the grand jury that indicted Skakel and at Skakel's probable cause hearing. Coleman admitted being high on heroin when he appeared before the grand jury, but stood by his assertion that Skakel boasted he would get away with murder.

In their federal motion, Skakel's defense team produced an affidavit from a Coleman family lawyer who said, in part, "It would be fair to say that no one in their right mind, knowing Gregory, would put the slightest confidence in his contentions concerning the supposed admissions by Michael Skakel."

The lawyer, John M. Regan Jr., said in his affidavit that he received a call at his Rochester, N.Y., office in 1998 from someone who identified himself as a Connecticut prosecutor and said he was trying to locate Coleman. The caller said he wanted Coleman to testify as a witness before a grand jury that was expected to indict Skakel.

Regan described Coleman as an "incorrigible drug addict" who "regularly engaged in dishonest, deceitful and criminal behavior in order to obtain money from his father."

I was incredulous and commented that I hoped he was not serious that he was going to use Gregory's testimony to accuse someone of murder," Regan said in the affidavit. "He responded by telling me not to worry, that they had plenty of evidence, and that they were going to 'get this guy.'"

Michael Sherman, Skakel's trial attorney, produced an affidavit for the appellate lawyers arguing that he may have been able to render Coleman's prosecution testimony ineffective if he had the Regan information.

Sherman asserts that he believes the person who called Regan was prosecution investigator Frank Garr. It is Garr, the appellate lawyers say, who was contributing to a book about the case.

"The information from Attorney Regan, together with Garr's 'book deal,' may very well have allowed the jury to conclude that this exculpatory evidence was being withheld from the defense in an effort to convict Michael Skakel, regardless of his possible guilt or innocence," the Sherman affidavit says.

The appellate lawyers also say the trial prosecutors improperly withheld from the defense police reports about a teenager named Andrew D. Wilson, who was 15 and living in Greenwich at the time of the Moxley murder.

In 1993, according to information Seeley and Santos say they have obtained, Wilson's sister called police to report her fear that her brother suffered from serious mental illness, was potentially dangerous and said he knew the identity of Moxley's killer. The lawyers say the information was transmitted to Greenwich police, who did not act on it.

About two months later, in August 1993, Wilson was charged with shooting to death the father of the man he said was Moxley's killer.

Seeley and Santos say the police reports generated by the call from Wilson's sister identified two potential suspects in the Moxley death — Wilson and the man Wilson said was the killer.

As was the case with the Regan information, the appellate lawyers say the Skakel prosecutors improperly withheld the Wilson police reports from Skakel's trial lawyers.In his affidavit,

Sherman contends that, had he been provided the Wilson police reports at trial, he could have argued persuasively to jurors that Wilson may have killed Moxley.

(NECN) - Lawyers for Michael Skakel, nephew of Ethel Kennedy, have filed a new appeal of his 2002 murder conviction, claiming that police and prosecutors failed to provide him with evidence pointing to another suspect and discrediting a key state witness.

The motion was filed Thursday in U.S. District Court in New Haven, Connecticut. It seeks a hearing and the setting of bail.

Skakel was convicted of killing Martha Moxley, 15, in their Greenwich neighborhood in 1975 -- the conviction coming in 2002. He is currently serving 20 years to life in prison.

His new appeal alleges his lawyers were never given two crucial pieces of evidence - a report received by Greenwich police that implicates another suspect and statements by a lawyer who said a key prosecution witness had a history of lying.


ALSO SEE THE NEWS 12 SKAKEL VIDEO THAT HAS BEEN PLAYING
ALL MORNING ON CABLEVISION:
Skakel: Key evidence was withheld in murder trial
Play The News 12 Skakel Video